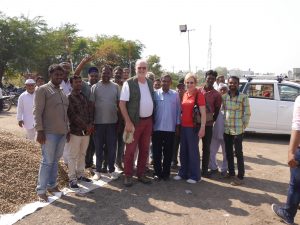 I’m sure you’ve heard that India is an assault on the senses – a place like no other. At first, you’re quickly overwhelmed by the sheer force of life around you. But once you adjust to the vivid colours, the noise and the apparent chaos, you notice something special floating to the surface of your consciousness – the welcoming smiles everywhere you go.

On our last two extended trips to India, my wife Pat and I were bowled over with the incredible warmth of those smiles. We were welcomed everywhere we went and, even in the most deprived rural areas where there was a palpable sense of hardship, this big, bearded bloke and his wife were treated with warmth, courtesy and those amazing smiles.

Like so many who have visited India, we fell in love the first time we set foot on the sub-continent. The country is so far removed from our experience of English life, yet somehow so familiar thanks to the historical con

nections of our worlds. Pat and I share those connections: my family has a long and varied history in India – my grandfather lived in Delhi and my mother was born there.

We have recently retired, and those recent visits to India were simply holiday adventures; but something much more meaningful gripped my subconscious on our last trip. It was just the kernel of an idea, but once it took hold, it grew into a project that now dominates our waking hours.

The idea seemed to come from nowhere. I’ve always been a petrolhead, so maybe something was triggered when 30 Harley Davidson motorcycles roared past us one day in Bangalore.

I have never been able to resist an adventure. Founding and developing a successful business over 35 years has been the journey of a lifetime, but retirement has left me ready for more. The idea of traversing India in a Morgan 3-Wheeler, making its characteristic sound and drawing smiles wherever we might go, is irresistible. What could be more crazy than a 73 year old retired businessman and his horse-mad wife driving an extreme vehicle across the world’s second most pop

But the idea didn’t stop there. I may be officially ‘retired’ but I have no intention of slowing down. Even now I have an immense appetite to make a difference, and it wasn’t long before my attention shifted to making this crazy trip contribute to India’s economy in some way.

erty, not just in cities but in rural communities. And this desire to make a difference lead us to Goonj, an NGO working with poor rural communities to help them lift themselves out of poverty. Goonj think about their work as giving people a ‘hand up’ rather than an ‘hand out’. You will have to wait for another blog to hear the fascinating and inspirational Goonj story.

With the idea born, the adventure is now in the final stages of planning, with one outstanding detail being the choice of Goonj communities to visit along the way.

The start of the route will be in Mumbai, the city that never sleeps; a financial and maritime centre and the Gateway to India. The road from Mumbai to Hyderabad has many good highways but also some poor, narrow and dangerous sections of road. Hyderabad is known as the City of Pearls, a jewellery centre, and is a booming industrial city with 6.7million people. The road from Hyderabad to Kolkata goes along the Bay of Bengal and is generally good.

Kolkata is a city of 14 million and is known as the City of Joy or the culture capital of India. We have not been to Kolkata and will be excited to visit the city as well as the Goonj offices there. We will stop for a few days to rest and explore, and hopefully put more smiles on faces.

The route on to Delhi goes via Varanasi on the banks of the Ganges, the Sacred City of Hinduism and Bu

ddhism, characterised by narrow streets and Ghats (steps down to the river). From Varanasi the route travels to Lucknow, along rather poor roads interspersed with modern highway. Lucknow is another great city but perhaps most famous for the siege of Lucknow when British forces were trapped but subsequently relieved during the Indian Mutiny. The city is a major commercial and industrial centre today, but its historic buildings are the heritage of the Delhi Sultanate and the Mughal Empire.

From Lucknow there is a long dash by new highway to Delhi, with warnings of local residents using the high-speed carriageway as a footpath. Delhi is the capital of India and where the headquarters of Goonj are located. So, a stop of a few days will be needed to meet people and put more smiles on faces. My grandfather lived at 24 Akbar Road in New Delhi, now the Headquarters of the Congress Political Party; a visit with the Morgan is in the planning. I wonder if they will let us in?

From Delhi the route will go to Jaipur – the ‘Pink City’ or the ‘Paris of India’, it is the capital of Rajasthan. We have been there before and it is stunning. However, the traffic is manic; we are hoping it will magically part to let the Mo

The route from Jaipur takes us to Udaipur with variable roads. Udaipur is one of the most beautiful places in the world and is known as the ‘City of Lakes’ with a complex of 11 palaces built on the side of the lake. The Maharajah has a famous car collection including Rolls Royces, MGs and Jaguars. The Morgan 3-Wheeler will be going to pay its respects!

From Jaipur there is another highway dash to Ahmedabad, the largest city of Gujarat and one of the wealthiest industrial cities in India. It was home to Gandhi’s Ashram when he was making political waves at the end of the Raj. From our previous visit, the traffic is relatively organised, apart from Festival time. We will have to hope we don’t coincide – but festivals in India come fast and furious.

The run from Ahmedabad to Mumbai will conclude the 5,600 km challenge. We will hope to be greeted with lots of smiles when, not if, we arrive safely. The first rule of driving in India is that you do not hit a sacred cow – but fortunately they don’t move very fast and so are easy to avoid. They also know instinctively that they are important; they too are almost smiling at you!